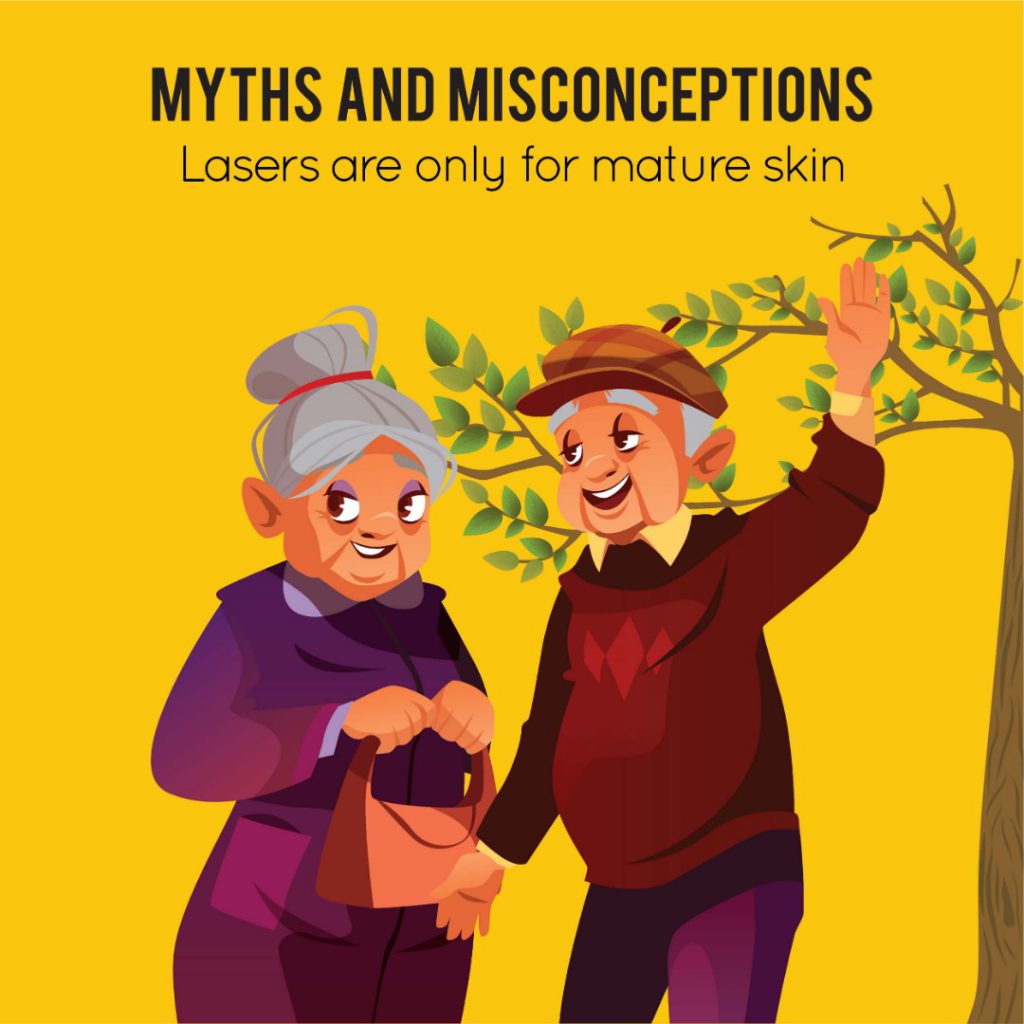 In this series we will share about laser therapies. Laser resurfacing is a technique used for treatment of wrinkles, scarring (acne or surgical), stretch marks, spider veins (telangiectasias) and sun damage (solar melanoma, actinic keratosis (thick, scaly or crusty skin).

Let’s dive in and try to untangle the mystery that shrouds cosmetic lasers.

Laser is an acronym for “Light Amplification by Stimulated Emission of Radiation” they work by emitting a wavelength of high energy light, which when focused on certain skin conditions (e.g sun spots) will create heat and treat the problem via destruction (e.g. removing the sun spots). There are many different wavelengths (or colours) of lasers because each wavelength treats different things. For the purpose of this exercise we shall split the lasers into 4 categories: ablative laser, non-ablative lasers, fractional lasers and non-lasers.

Aside from lasers, there are other ways for skin rejuvenation to be achieved, these include:

One of the benefits of using laser is that it allows the aesthetic physician to customize the treatment for each patient to specific areas of their face. Laser can also be combined with Liposuction to help tighten and smooth over the new contours after removal of excess fat.

Myths and Misconceptions about Laser Therapies

Truth: Laser can make your skin look younger and better but not entirely flawless. People who undergo treatment will notice a drastic difference but the imperfections will not disappear completely. That’s especially true if you choose a non-ablative or fractional laser treatment. You will often find that non-ablative lasers produce less dramatic results.

Myth: Anyone can get laser resurfacing done

Truth: Laser resurfacing works best on fair-skinned people who don’t have active acne flares or frequent cold sores. People who have darker skin tones will need to be careful and consider other options such as RF or micro-needling. The laser itself could cause acne breakouts on treated skin, so those who have active acne will need to consult with their doctors beforehand about their options.

Truth: A laser treatment can be used to complement a facial plastic surgery but since surgery and lasers target different concerns, they can’t be exchanged for one another. The more mature the skin is, the less collagen and elastin it contains, hence the formation of deep lines and wrinkles, lasers are great for improving the texture and tone of the skin. Lasers however cannot remove skin laxity or dramatically tighten skin. For skin that’s suffering from extreme laxity, surgery is the best option.

Truth: Laser peels actually make the skin stronger. Although ablative lasers are used to peel the skin and remove the top layer, this action encourages the skin cells to grow and replace the older damaged cells. The treated skin may look rough initially but ultimately will strengthen and thicken by the production of collagen and elastin. Collagen supports the skin structurally and will cause it to become thicker, stronger and more youthful looking.

Truth: Laser used for skin treatments emit radiation in the form of light, and they do not expose you to dangerous radiation. The light will only penetrate one to four millimetres into the skin. Laser radiation should not be confused with harmful radiation which comes in the form of radio waves, ionizing, x-rays, or radiation from radioactive elements such as radium. At Beverly our goal is to improve your skin.

Myth: Laser can cause cancer

Truth: The light emitted from laser does not contain the wavelengths which causes or triggers cancer. Therefore, lasers do not cause cancer and actually be used to remove skin cancers.

Myth: Lasers are only for mature skin types

Truth: I’m sure you’ve heard the saying; prevention is better than cure. Likewise, in aesthetic treatments it does not apply only to older generation. Many of us tend to ignore our skin problems in our youth thinking that topical skincare is sufficient to fend the signs of ageing or sun damage. This will intensify the skin problems making it a lot harder for treatments to reverse the damage. Undergoing early treatments can reduce pigmentation and improve the skins collagen production dramatically. You can start doing laser treatments as young as 25, stimulate your collagen while you still have them. If you are mature, you might need more sessions to get the same results for collagen production/stimulation.